A Citizen's Guide to the TULE ELK of California PR17

A Teacher’s GUIDE to the Tule Elk of California 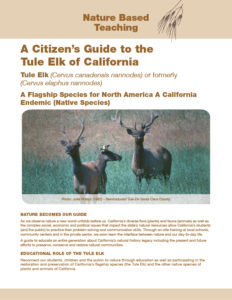 This Citizen’s GUIDE is an opportunity to learn about an incredible CASE STUDY of a species, the Tule Elk,  that was on the BRINK OF EXTINCTION in California. An opportunity to explore, research, draw, describe and learn about local species in your area that are unique, beautiful and need protection.  You can use this Guide as a model for a local species project in your region! This project can be done in teams or individually and provides an incredible opportunity to explore an overview of our natural systems and unique native species! 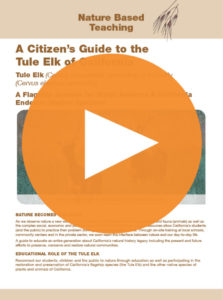 This SHORT COURSE/VIDEO TUTORIAL is a supplement to the A Citizen’s Guide to the Tule Elk of California PDF and is helpful in providing guidance and strategies in utilizing this GUIDE with your students in class! 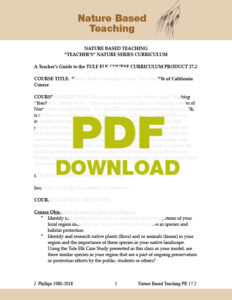 This course is a part of the Nature Based Teaching “Teacher’s” Nature Series and is an introduction to a flagship species of North America, the Tule Elk.  It provides an incredible case study of a species that was brought back from the brink of extinction through the efforts of leaders at the federal, state and local levels of government as well as citizen activists!  This curriculum provides a model for you, as the teacher, and your students to explore the rapidly growing and hopeful fields of study including Conservation Biology and Restoration Ecology! This Course Curriculum includes Course Learning Objectives focused on your local region as well as areas with Tule Elk, Course Assignments, Course Instructor Guidelines, Student Performance Evaluation techniques and a detailed overview of the Tule Elk Course Vocabulary, Content and other Topics for Students and Student Teams to explore over an entire semester or academic year! This is a Nature Based Teaching FREE PRODUCT for teachers! 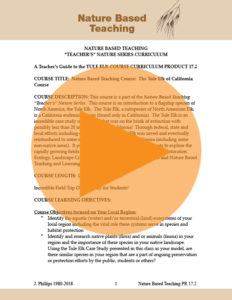 Tule Elk (Cervus canadensis nannodes formerly Cervus elaphus nannodes) are endemic to California.  The Tule Elk faced near extinction in the last century due to the pressure of early settlement.  As a result of full protection and other conservation measures, the numbers of Tule Elk have gradually increased so that presently there are at least 24 herds located throughout the state with approximately 5,000+ Tule Elk.

As part of California’s overall management plan, Tule Elk have been reintroduced (back into native habitat) and introduced (placed into areas not historical Tule Elk habitat including the Owens Valley) into various areas over the past several decades (early 1900’s to 2000  – nearly 100 years).

In many of these relocations the elk have remained in the areas targeted for establishment of a herd.  Early attempts to establish herds in specific locations have resulted in a scattering of animals (outside of target areas) or gradual disappearance of the relocated elk.

Blue Oak, a native and endemic oak species of California. The Blue Oak is the most drought tolerant of California’s deciduous oaks and the strategies that the Blue Oak has evolved to survive in drought conditions is one of the most amazing adaptations of any plant! Over 100 cities and counties in California have ordinances providing some level of protection for oak and at the state level, the Integrated Hardwood Range Management Program, a collaborative effort between the University of California and the California Division of Forestry, is monitoring Blue Oak populations to provide recommendations for future legal protection.  (Oaks of California, Bruce M. Pavlik, Pamela Muick, Sharon Johnson, Cachuma Press, 1993; and Janet L. Fryer, 2007, U.S. Department of Agriculture, Forest Service, Rocky Mountain Research Station, Fire Sciences Laboratory).

The Tule Elk co-evolved with other California natives and will help in the restoration of California’s native grasslands and oak woodlands/savanna!  Tule Elk help “disperse” native oaks, native grasses and possible other native species of California!  This Tule Elk natural history is important to share with others including students, the public, leadership and resource agencies! Tule Elk are helping to restore the native landscape of California! A great example can be seen at Pacheco Pass State Park in California!  In areas of this State Park, where there are free roaming Tule Elk herds, and there has been no cattle grazing allowed in this protected area of Pacheco State Park since the 1990’s, the native perennial bunch grasses and native Oaks are regenerating and thriving! (See our naturebasedteaching.com FB live video on November 8 at Pacheco State Park).

California’s Blue Oak Woodlands/Savanna and Native Grasslands are among the most ecologically important habitats on Earth (certainly in California) and Tule Elk are endemic to these native plant communities! Protection, preservation and restoration of free roaming Tule Elk within these critical plant communities especially on public lands is essential and is key to the long term survival of these native landscapes of California!  The Tule Elk co-evolved with these native plant communities and are an essential component of a Sustainable Management Plan for California Native Species. (See our naturebasedteaching.com FB live video at San Luis Reservoir Wildlife Area on November 15, 2017)

Tule Elk were once abundant throughout most of Central California as late as 1850.  Early accounts describe the boundaries of native Tule Elk range as Shasta County to the north, Buena Vista and Tulare Lakes in Bakersfield to the south, throughout the Sacramento and San Joaquin Valleys and surrounding foothills and the Pacific Coast to the west (see citations).

Elk were extensively hunted throughout the range for meat, lard and fur.  As the population dwindled, the remaining elk shifted from the foothills into the valleys where they inhabited dense stands of tule marshes.  Hunting pressures, coupled with the fact that elk occupied prime agricultural and grazing land, soon led to their near  extermination.

By the 1870’s, it was thought that tule elk were extinct throughout their native range.  A small group of elk numbering fewer than 20 individuals were discovered on the Miller and Lux Ranch located in the southern San Joaquin valley near Buena Vista Lake.  These elk were protected and by 1914 the population had grown to more than 400 individuals.

As the Miller and Lux herd grew, attempts were made to reestablish some of the elk into various parks, reserves, zoos, golf courses, and private ranches.  Many of these relocated herds gradually died out or had to be relocated to other areas.

Through the early efforts of the California Department of Fish & Game (CDFG) and now California Department of Fish & Wildlife (CDFW),  three permanent elk herds were established in California.  By 1969, the Tupman State Reserve herd in Bakersfield had 32 elk and the Cache Creek herd in Colusa County consisted of 80 elk.  The largest herd, located in the Owens Valley, Inyo County (and not part of the original range to tule elk in California), consisted of 300 elk.

The State legislature enacted the Behr Bill in 1971 which prohibited the hunting of tule elk in California until the state population exceeded 2000 or until it could be determined that suitable elk habitat no longer existed in the state (CDFG, 1980).  In 1976, the U.S. Congress passed a resolution which stated that 2000 tule elk is an appropriate national goal and directed federal agencies to make federal lands available for preservation of tule elk (BLM, 1980).  The Tule Elk is the only mammal in U.S. history where there was a joint resolution of Congress regarding its protected in history (see research paper from UC Berkeley).

An Interagency Task Force was formed comprised of representatives from the National Park Service (NPS), the United States Fish and Wildlife Service (USFWS), the United States Forest Service (USFS), the Armed Forces, Bureau of Land Management (BLM), California Department of Parks and Recreation (CDPR), and the CDFG (CDFG, 1978).  This task force evaluated and selected potential sites throughout the state for relocation of tule elk.  The CDFG was designated as being legally responsible for the transplanting operations.

Reintroduction and introduction became the primary methods utilized to establish new herds and to remove elk from existing herds at or near carrying capacity.  The CDFG began efforts to relocate elk into other areas.

A herd was established at the San Luis Wildlife Refuge in 1974 and elk were released at Concord Naval Weapons Station in January 1977 (CDFG, 1979).  In 1977, the Owens Valley had a surplus of 92 elk and early in 1978 these elk were used to establish herds at Mt. Hamilton in Santa Clara County, Lake Pillsbury in Lake County and Jawbone Canyon in Kern County.  In March 1978, elk were relocated to Point Reyes from the San Luis National Wildlife Refuge.  Hunter Liggett Military Reservation and Camp Roberts also received elk in 1978 (CDFG, 1979).  As surplus elk were produced in various herd, new areas for relocation were established.

Today there is approximately 5,000+ Tule Elk statewide according to the California Department of Fish & Wildlife.

Phillips J. & S. A Citizen’s Guide to the Tule Elk of California, Nature Based Teaching, PR 17.